An economy that works for people and planet needs a new kind of business model. This cannot be today’s dominant mode of blinkered profit maximisation, where the environment is exploited and society manipulated. Nor can it be a model that is fixated only on delivering financial returns to the few. The new economy will not be created by businesses that wear this self-destructive straight-jacket.

Luckily, there is another way: Fair Trade. The Fair Trade model is based around two big ideas. The first is commodity certification, so that any business, regardless of its broader purpose, can buy raw materials like cocoa, cotton and coffee on Fairtrade terms, thus making sure their supply chains are socially responsible and environmentally sustainable.

The second big idea is the social enterprise model at the heart of the WFTO community: the idea of building an entire business around a social mission. Apart from practicing Fair Trade, all WFTO members also use the majority of their profits to benefit workers, farmers and artisans, and their legal structure makes sure that their social mission comes first. This liberates businesses to pursue a social mission and busts the myth that business must always maximise profits. 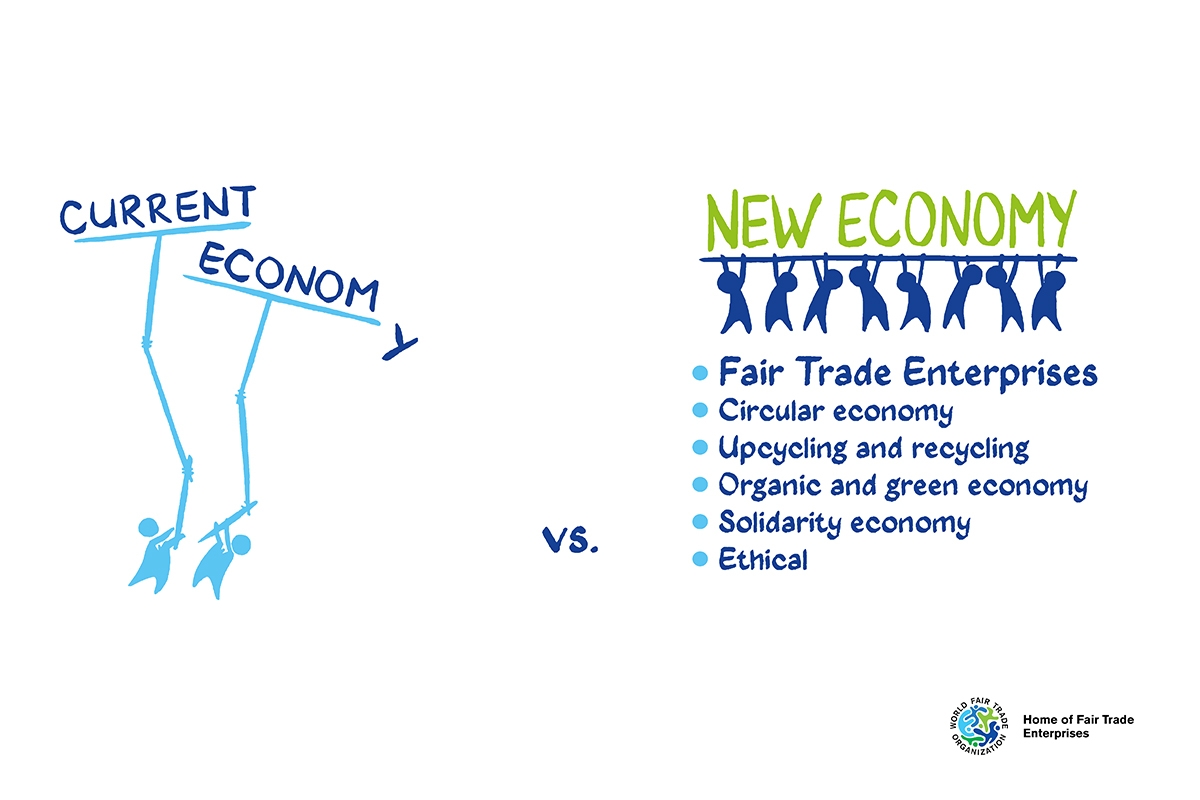 From Christchurch to Kathmandu, Cape Town to Quito, across 76 countries around the world, Fair Trade Enterprises are serving their communities and serving a social mission, rather than always putting finance first. One manager of a Fair Trade enterprise told us: “We must remain committed to our communities through thick and thin. This means we can’t simply switch suppliers based on cost, even if this cuts our margins.” Within today’s model of shareholder capitalism, most businesses aren’t designed to make such choices.

The business of choice

A business is defined by the choices it makes, particularly where there are trade-offs and tensions between social and commercial goals. Many of these choices come down to short-term profit maximisation versus long-term increases in social wellbeing. Examples of these choices might include either delivering a larger dividend cheque to shareholders, or instead investing those profits to reduce environmental impacts, ensuring the broader economy and society can avoid ecological collapse.

What helps determine these choices are the structural features of a business: how it is managed and regulated, its ownership model, its profit strategy, relationship with stakeholders and, ultimately, the core purpose of the business itself. This DNA of a company will determine how it will respond when its self-interest (short- or long-term) is pitted against benefiting people and planet.

Businesses that are locked within the straight-jacket of profit maximisation have their hands tied when it comes to making these choices. Shareholders, investors, and corporate boards put huge pressure on business leaders to produce as much profit as possible – even when this is manifestly damaging to society, the environment, or even the long-term viability of the business itself.

Fair Trade as a model of enterprise

But by remaining mission-led, Fair Trade Enterprises demonstrate business can be viable without endlessly pursuing profit maximisation. This is an idea that can transcend social and environmental objectives and can be a proof of concept for the enterprises of the new green economy. Here are some examples.

El Puente in Germany is perhaps a textbook example of a multi-stakeholder model of business. Producers, employees, customers and founders have equal shares and equal power in the board. Profits are always used to further the goals of Fair Trade, based on the mission of supporting economically marginalised producers.

Creative Handicrafts in India is owned and controlled by 270 workers and producers, 240 of which are women. All profits are reinvested or used to further the mission of supporting these producers. This means they are free to invest into training and jobs for women who would otherwise have no income.

Mahaguthi in Nepal is a private business that manufactures clothes (including for People Tree, Mata Traders and other Fair Trade brands), as well as toys and various paper products. They lock-in their social mission by requiring all profits be reinvested to benefit its workers and artisans. Without shareholders pressuring them to extract profits, they can pursue commercial viability while prioritising the interests of producers.

The chief executives of such businesses aren’t pressured to drive down costs and squeeze their suppliers. On the contrary, the workers and farmers are the voices that dominate their board rooms, forcing management to run the business in their interests.

From micro to macro

This new way of doing business, of thinking beyond the immediate bottom line to environmental and social impacts, also looks increasingly likely to become the foundation of the new economy around the world. As consumers and voters shape their preferences in the face of environmental and social dangers, business models must transform, just as governments must respond with a bold vision of the new economy.

As ‘business as usual’ becomes increasingly unviable, it will be small, flexible and purpose driven enterprises that are best positioned to take up the slack. A triple-bottom line comes naturally to businesses that work close to the ground and grow with – not despite – their local communities and environment.

The Green Economy Coalition has been exploring new visions of sustainable economies and businesses around the world. The change that is needed is now being catalysed from the very top and the very bottom – the entrepreneurs who think beyond profit, joined by leaders who are starting to think beyond GDP.

As the global economy slowly wakes up to the fact that a new relationship with nature is urgently required, the Fair Trade movement is already leading the way. Building a greener economy means mainstreaming many of the same approaches Fair Trade Enterprises have already embedded - and which other social enterprises are continuing to innovate.

These business models have been criticised for remaining small-scale, and being dwarfed by the mega-corporations that tower over our global economy. But why do they need to get large, when they can multiply? When you look at a forest, it doesn’t morph into a single mega-tree. It multiplies into many thriving plants and flora, each relatively small in size. Together, they make the forest. The scale challenge is not to make mega corporations become mission-led, but to multiply these mission-led enterprises.

As we celebrate World Fair Trade Day this Saturday (May 11), we hope to take inspiration from Fair Trade Enterprises and the broader community of social enterprises that demonstrate business can be built around a social and environmental vision. For decades, they have shown a resilience, demonstrating commercial viability without succumbing to blinkered thinking of profit maximisation at any cost. This pesky community of businesses are pioneering an idea that we’ll need to build on if business, trade and our economies are to succeed in creating a green and fair economy.

This article was first published on Businees Green.