As awareness of Fair Trade grows, so do misconceptions. These are some popular myths about Fair Trade and the realities behind them.

Myth: Fair Trade is about paying developed world wages in the developing world.
Reality: Wages are designed to provide fair compensation based on the true cost of production, and are not based on any developed world (North American or European) wage standards.

Fair wages are determined by a number of factors, including:

Also, as Fair Trade Organisations in developed countries grow as successful small businesses, they employ more and more individuals in their communities.

Myth: Fair Trade is anti-globalisation.
Reality: International exchange lies at the heart of Fair Trade. Fair Trade Organisations seek to maximise the positive elements of globalisation that connect people, communities, and cultures through products and ideas. At the same time, they seek to minimise the negative elements that result in lower labor, social, and environmental standards which hide the true costs of production.

Myth: Fair Trade is a form of charity.
Reality: Fair Trade promotes positive and long-term change through trade-based relationships which build self-sufficiency. Its success depends on independent, successfully-run organisations and businesses–not on handouts. While many Fair Trade Organisations support charitable projects in addition to their work in trade, the exchange of goods remains the key element of their work.

Myth: Fair Trade results in more expensive goods for the consumer.
Reality: Most Fair Trade products are competitively priced in relation to their conventional counterparts. Fair Trade Organisations work directly with producers, cutting out middlemen, so they can keep products affordable for consumers and return a greater percentage of the price to the producers.

Myth: Fair Trade results in low quality products for the consumer.
Reality: While handmade products naturally include some variation, Fair Trade Organisations continuously work to improve quality and consistency. Through direct and long-term relationships, producers and Fair Trade Organisations dialogue about consumer needs and create high quality products. Fair traders have received awards at the international Cup of Excellence and Roaster of the Year competitions, SustainAbility in Design, the New York Home Textile Show, and other venues.

Myth: Fair Trade refers only to coffee and chocolate.
Reality: Fair Trade encompasses a wide variety of agricultural and handcrafted goods, including baskets, clothing, cotton, home and kitchen decor, jewelry, rice, soap, tea, toys, and wine. While coffee was the first agricultural product to be certified Fair Trade in 1988, Fair Trade handcrafts have been sold since 1946. 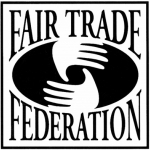