“Journey to Pavitramenthe highlights that Dr. Bronner’s is not just a brand name, it is a healing company. It not only walks its talk, it dances it, combining the highest regenerative agricultural practices with the fairest, kindest, social practices. I do not know of a company that does more per dollar for the earth and its people than Dr. Bronner’s,”

Our new short documentary Journey to Pavitramenthe tells the story of the farming communities in Bareilly, India that supply the organic mint oil used in Dr. Bronner’s iconic peppermint soap. Mint is key to Dr. Bronner’s legacy product and lends that cool, refreshing, and tingly sensation that we’re  known for. In Bareilly, mint crops are key to the livelihoods of over 1,500 farmers and their families. These farmers are now shifting to regenerative organic agricultural practices that increase yields and soil fertility while fostering resilience in the face of a changing climate:

Since the dawn of farming, it is estimated that worldwide, agricultural soils have lost from between 30% to 75% of their original soil organic carbon, and with that, a key source of fertility and resilience. In the last century, with the widespread adoption of industrial agricultural practices such as synthetic nitrogen fertilization, intensive tillage and monocropping, the depletion of soil carbon has only accelerated.

The carbon that is lost from the soil ultimately goes into the atmosphere where it becomes a greenhouse gas and contributes to climate change. The food system at large—including feed, fertilizer and pesticide manufacture, processing, transportation, refrigeration and waste disposal—accounts for 30% or more of total annual global greenhouse gas emissions. Much of this comes from mismanagement of land—from an approach that views soil as dead dirt—rather than as a living resource that must be nurtured.

In India’s state of Uttar Pradesh province, where mint for our mint oil is farmed, degraded soil is a major issue. The soil is lacking soil organic matter, in the form of carbon and other nutrients, that plants need to thrive and grow. Lack of soil organic matter means the soil is less able to retain water—and while many small-holder farmers in this region have access to water for flood irrigation, the ground water levels are going down as extraction from aquifers has increased.

Farmers in Uttar Pradesh are experiencing first-hand the long-term disastrous consequences of industrial agriculture. The use of synthetic fertilizers has killed soil microbial life that helps put carbon and other nutrients back in the soil. Harvested plants take nutrients out of the ground, but insufficient organic matter is returned to the soil. Farmers find it difficult to change from using synthetic fertilizers, which are perceived to give farmers a ‘guaranteed yield’. Unfortunately these same fertilizers do not provide organic matter back to soils and in turn destroy the living ecosystem in the soils upon which organic regenerative agriculture depends.

We feel it is useful to detail some of the regenerative organic practices that Pavitramenthe farmers are using to break this destructive cycle and bring soil back to life. 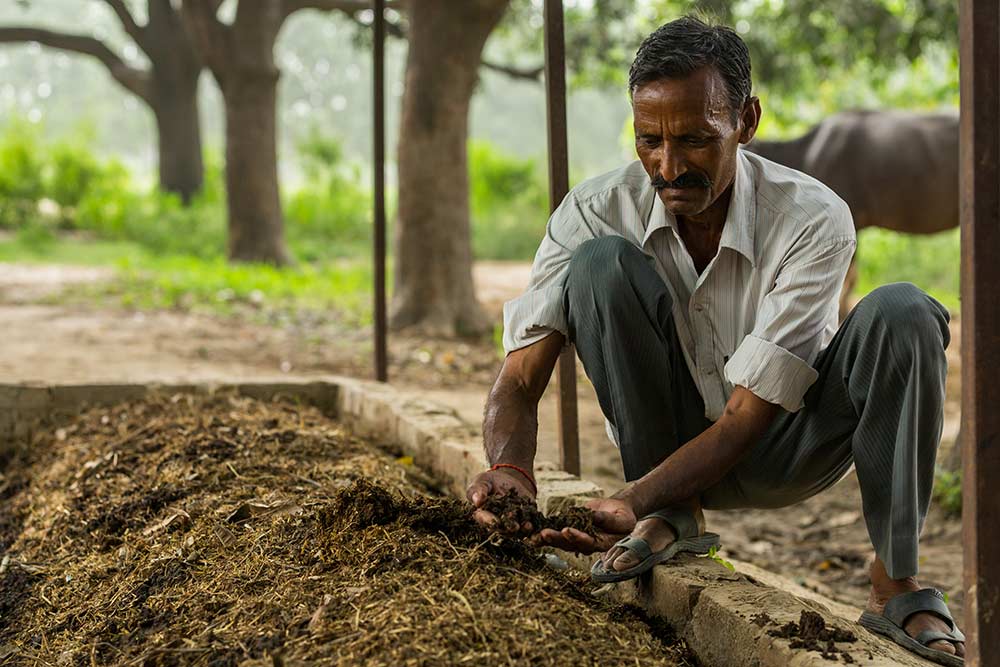 Compost is a valuable soil amendment for organic farming systems. The main idea of composting is to take organic waste materials and allow them to decompose under specific conditions, creating a nutrient-rich and stable soil conditioner that acts as an organic fertilizer, controls erosion and fosters beneficial soil microbial life. Farmers at Pavitramenthe use both thermophilic compost and vermicompost.

Thermophilic compost, as the name implies, involves the use of heat-loving bacteria to break down organic matter. Pavitramenthe’s thermophilic compost is mostly produced at a centralized composting facility, which facilitates the collection of biomass waste and distribution of compost. Cow dung, leaves and crop wastes are put into the compost as base materials which the thermophilic bacteria feed on to produce stable organic matter. The facility is able to produce about 10,000 metric tons of compost per year, which is distributed to farmers at a subsidy. Additional satellite locations are being added to increase supply. 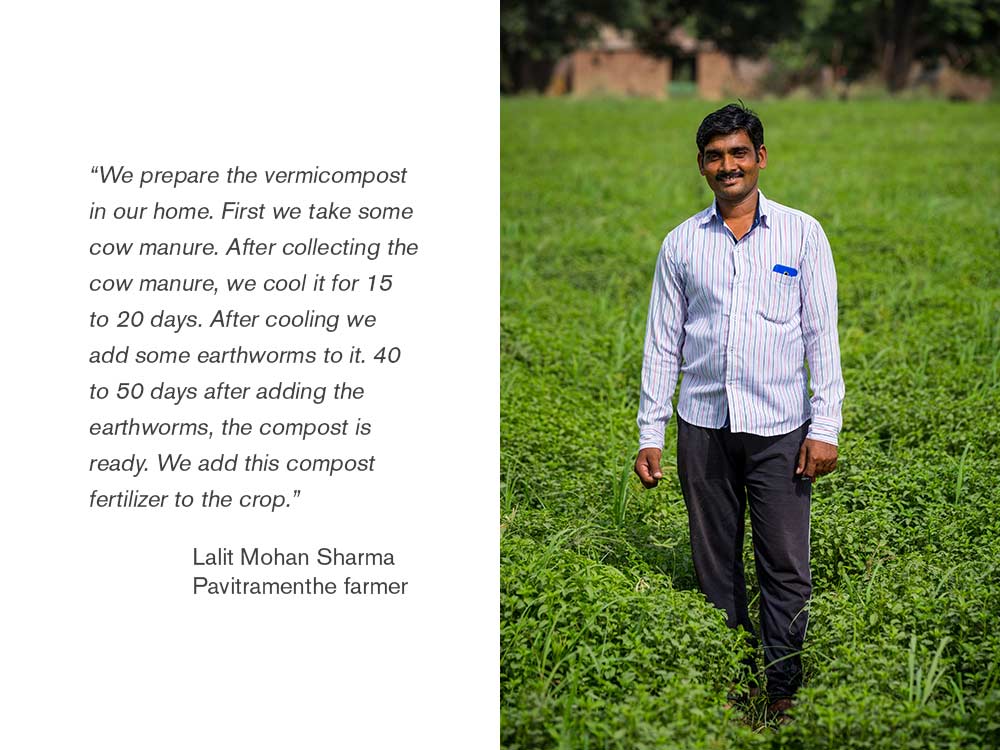 Pavitramenthe farmers also make their own vermicompost using simple shelters located near their farms or homes. Vermicompost makes use of worms to enhance the decomposition process. These worms are able to help soil break down soil more quickly, adding additional carbon and fertility to the soil through their worm castings. Farmers collect cow dung, food waste from their homes and crop residues as the base material for their vermicompost rows. Worms digest this material and produce an extremely rich compost that can be used as an organic soil amendment.

Bare soil is a major cause of land degradation and often a result of how industrial agriculture is practiced. With no roots to hold it in place and no plants to slow the wind and water that buffet it, bare soil is eroded and carried away. The sun’s powerful rays hitting directly on the ground make conditions inhospitable for soil life, which includes worms, microbes and fungi.

One simple and affordable solution to cover bare soil is the use of mulches. Farmers at Pavitramenthe are increasingly encouraged to use crop residues—that is, any part of the plant that is not harvested—and leave them on the ground to cover the soil as mulch. This is farming in a way that conforms with nature, where dead leaves and fallen trees are constantly covering the ground, to slowly decompose and return nutrients to the soil. 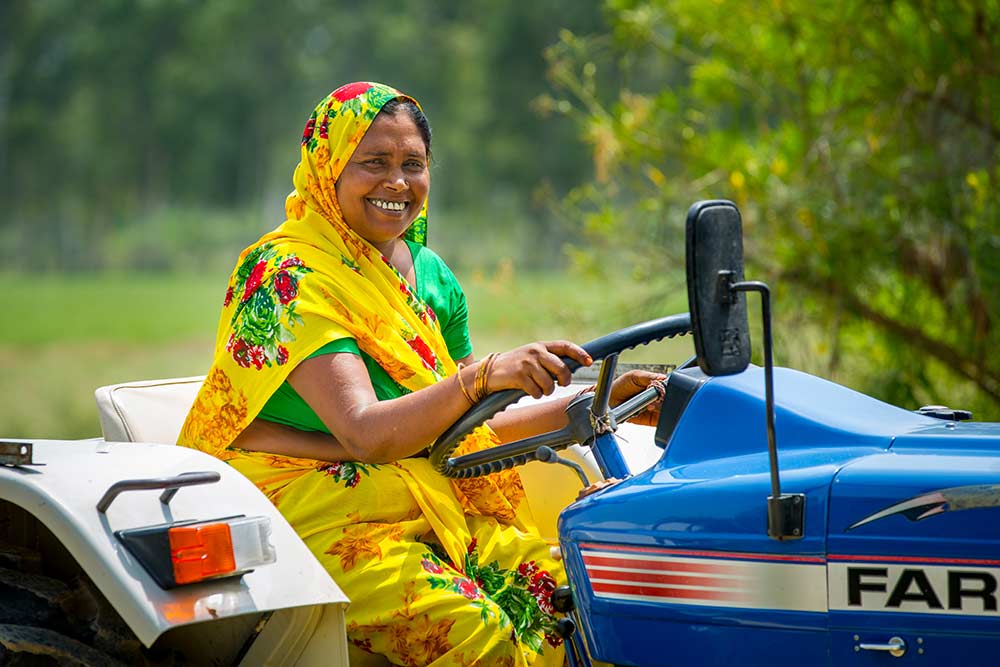 Another way to protect and encourage soil life is through conservation tillage. Tillage was traditionally done deeply and repeatedly by Pavitramenthe’s farmers to aerate soil, control weeds, incorporate fertilizer and loosen the soil for planting. We now know that intensive tillage of this kind does more harm than good—it breaks up fine roots and destroys soil structure, depletes soil ecosystems by exposing them to sun and air, removes crop residue that could be used as mulch, and releases carbon and nitrogen from the soil up into the atmosphere, where they become greenhouse gasses.

Pavitramenthe provides farmers with specialized seeding machines that can sow plants without digging into too deeply and disrupting the soil structure. As is the case with many other regenerative organic practices, farmer education is one of the most important tools to transform practices from ineffective ones that have become accepted practice, to fertility-building methods that simply require a different approach.

By now, the main ideas of how to preserve soil ecosystems and build up soil organic matter should be coming into focus: keep roots in the ground and keep soil covered. Cover crops, especially nitrogen fixing crops like dhaincha and clover, are excellent tools for achieving these aims.

Fortunately, many mint farmers in this region of India are already keeping several crops in rotation, including leguminous crops like lentils and peas. The role of Dr. Bronner’s and Pavitramenthe leadership has been to make sure that the practice is widely adopted, that seeds for beneficial rotational crops are available to farmers, and that they understand the agricultural science that underlies the practice. 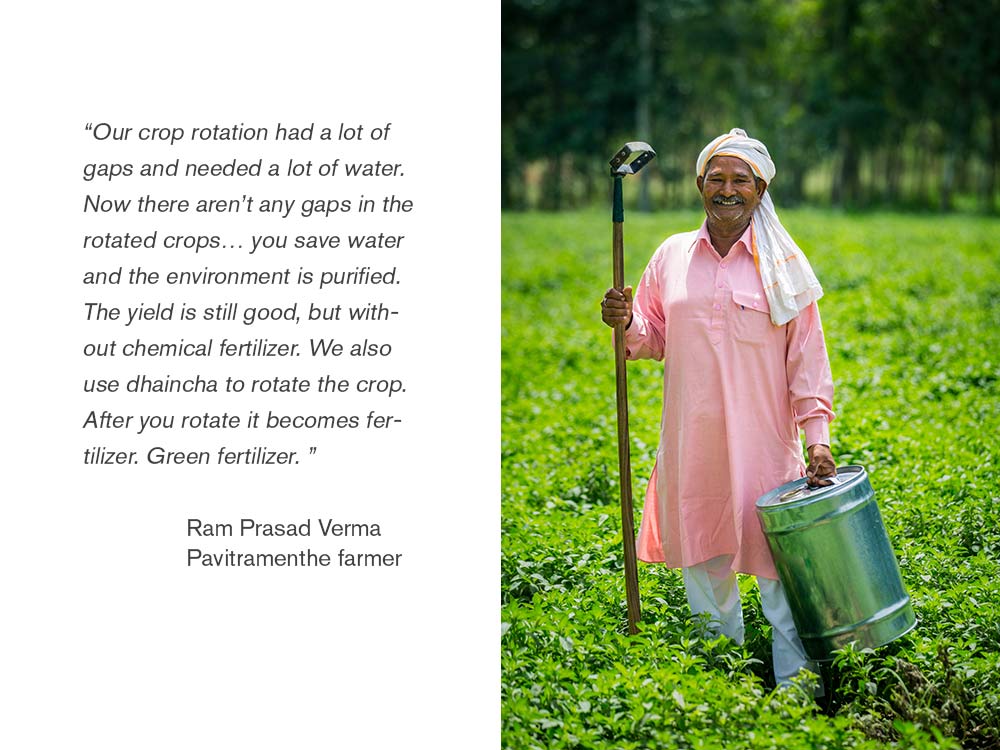 A useful crop that farmers have been encouraged to add to their rotations is dhaincha (sesbania). Though Dhaincha has commercial use as a fiber crop, it is excellent in this context as a nitrogen fixer and can be lightly incorporated into the soil as a “green manure” or “green fertilizer.”

A New Approach, A Way to Heal Earth

It’s no secret that industrial chemical agriculture on a global scale is a massive cause of greenhouse gas emissions and is helping to accelerate the rate and impact of climate change. We need a new approach to agriculture globally. The widespread adoption of regenerative organic practices that sequester atmospheric carbon as stable soil organic matter could make a fundamental difference in the face of the climate crisis.

Our partners in Sri Lanka, Palestine, and Ghana are also transforming their operations to implement and scale these practices. We made Journey to Pavitramenthe to shed light on how companies can construct supply chains from the ground up that nurture healthy soil and healthy communities. In Journey to Pavitramenthe, a chorus of diverse voices come together to send the message that regenerative organic agriculture will Heal Earth if we unite around the world to embrace this solution.

By Ryan Fletcher
Originally published on Dr. Bronner's Magic Soaps blogsite
Ryan Fletcher is Dr. Bronner’s Director of Public Affairs and Media Relations. He has worked full-time with the company since 2007. He lives in Washington, DC and is a proponent of cooperative living and a vegan lifestyle. See all stories by Ryan here.