The Economy Has Been Rigged. We Can Change That!

With growing inequality, entrenched poverty and a pending ecological crisis, it is time to revisit the central design feature of business and explore the alternatives that exist the world over.

Business was invented by humans. In order to employ humans, trade products and services, facilitate investments and foster production, we as societies designed business to meet human needs. We have a choice about what business looks like – its purpose, priorities, and structure. So, we do not need to accept that business must have a one-track mind, focused only on growing profits for shareholders.

The business world is diverse, but in most countries, it is dominated by businesses that exist primarily to grow the capital of their investors. This is especially the case for larger companies. In the past few decades, corporations have gone to an extreme end of the spectrum, where only one stakeholder group matters – the shareholder. In the 1970s, a typical corporation in the U.S. would return about 33% of its profits to shareholders. Today, it is 70%. The trend of increasingly channeling growing profits to shareholders is happening everywhere. From the UK to the U.S. to India, shareholder capitalism has become supercharged. This is central to the global story of rising inequality.

INEQUALITY HURTS AND BUSINESS IS DRIVING IT

Rising inequality destabilizes societies, democracies and economies, and it is hindering our fight to end global poverty (according to the World Bank). Since the turn of the century, the poorest half of the world’s population has received just 1% of the total increase in global wealth. Meanwhile, half of new wealth has gone to the richest 1%. By 2017, only eight men owned as much wealth as the world’s poorest 3.6 billion people combined. Inequality is rampant and has been getting worse. This is bad for all of us.

What does business have to do with this? Businesses populate our economies, channel investments and wages, and are pivotal to determining how the fruits of our economies are shared. For some time now, profits have grown, but real incomes have not. Economies are expanding, but farmers and workers are getting a decreasing share of the pie.  In the 1980s, a cocoa farmer would get about 18% of the value of a chocolate bar, while today that same farmer gets below 6%. Similar trends can be found across the board, as workers overall get a decreasing share of the global economy. In global supply chains, prices paid are failing to cover the costs of sustainable production in products from tea to t-shirts (as covered in the film, True Cost). These are the decisions of businesses to squeeze suppliers, grow margins and maximize profits. Most companies are doing what they are designed to do – extracting maximum returns for their shareholders. But this does not have to be the case.

“THE SHAREHOLDER REVOLUTION DEVOURS ITS CHILDREN”

Are not most people shareholders anyway, through their pension funds, for instance? And is it really so bad that corporations are increasingly obsessed with growing the wealth of their shareholders? Yes, this is a big problem. The majority of shares are owned by a small group of people. In the U.S., the richest 10% own 84% of shares. As so eloquently put by Mike Konczal in his article “The Shareholder Revolution Devours Its Children” in The Nation, “The economy has been rigged to channel wealth to a tiny elite” and “these shareholders are also probably not you.” Put another way, if we share the fruits of the economy based on the size of peoples’ wealth, we will make business obsessed with growing dividends, and the dividend checks to the richest will get exponentially larger and larger. If business is fixated on growing those dividend checks, they will squeeze their workers and suppliers, cut costs and think short-term. That is a scenario where we have designed business and the economy to drive up inequality. And that is exactly where we have ended up.

But there is hope. Businesses are emerging around the world that show it is possible to prioritize a broader range of stakeholders – and purposes – than just the wealth of shareholders. These range from employee and farmer ownership, to hybrid ownership structures and fair trade enterprises, to social enterprises and cooperatives.

BUSINESS OUTSIDE THE BOX

Let us start by looking beyond the fair trade movement. In the U.S., initiatives like Working World are supporting conversion of traditional businesses to worker cooperative models, from Arizona to the Bronx. Meanwhile, the B Corporation initiative has helped businesses broaden their agenda from a pure focus on profit maximization, spreading to over 2,600 companies around the world and encompassing major brands from Ben & Jerry’s to Eileen Fisher. In the UK, the John Lewis Partnership has redefined retail through a model where 83,000 workers co-own the successful department store chain with annual sales of over £11 billion. Farmer-owned processing in agriculture (such as KTDA tea in Kenya) and worker-ownership in heavy industry (such as Mondragon in Spain) are also bucking the trend and channeling more of the value generated by the business to their farmers and workers. Meanwhile, mission-led businesses like Fairphone are demonstrating that business governance models can be shaped to prioritize a mission other than profit maximization.

These are not businesses making every decision based on the pursuit of forever-growing profits. Instead, they are businesses that focus on balancing a social mission with achieving commercial viability. They are not confining themselves to doing good only when it is the path to greatest shareholder wealth. 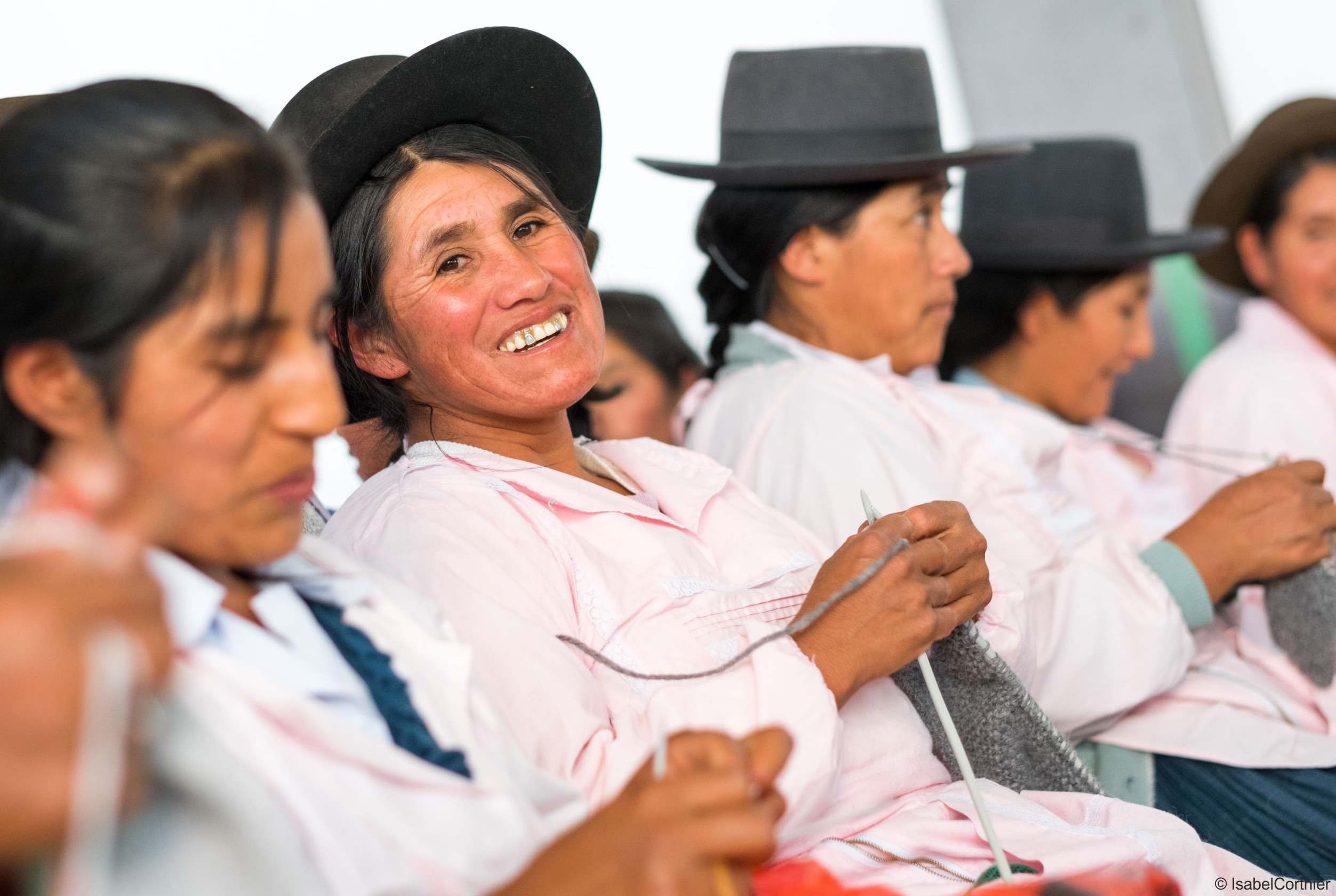 Diamanta Peru's priority is to create economic opportunities for women. They reinvest their profit to pursue this mission. Photo: Diamanta

The fair trade movement is full of business models that are designed to prioritize the interests of workers, farmers, artisans and communities. The organization I lead is the verification body and the global community for these fair trade enterprises. These enterprises provide a fundamentally different kind of power relationship for workers, farmers and artisans who would otherwise have little power or priority within a typical business. Some of the models are cooperatives. Others are hybrid models that have combined collective ownership with a social mission.

Take, for example, CORR – The Jute Works in Bangladesh, structured to give their 5,000 artisans majority control on their board and ensure profits are used to benefit these artisans. Other examples are Township Patterns in South Africa and Global Mamas in Ghana – businesses that exist solely to support artisan-owned producer groups and reinvest profits for that purpose. In Ecuador, Maquita runs several social businesses, investing all profits to benefit their communities and ensure they are represented on their boards. In India, models like Creative Handicrafts and Last Forest demonstrate that worker and farmer ownership can compete with profit-hungry apparel factories and clothing outlets. And consider Mahaguthi in Nepal, which protects its social mission by requiring all profits be reinvested to benefit its workers and artisans.

The chief executives of such businesses are not pressured to drive down costs and squeeze their suppliers. On the contrary, the voices of workers and farmers dominate their board rooms, forcing management to run the business in their interests. There are now 330 such fair trade enterprises that span over seventy countries, remaining commercially viable by prioritizing a social mission. The experiment is indeed working.

I was captivated by this diversity of businesses that are bucking the mainstream business trend. So, I dug deep and analyzed all 330 World Fair Trade Organization (WFTO) members to find that they all share some common trends in the way that they are structured. They all had at least one of these four features to ensure that their business is mission-led:

In essence, such models all have liberated themselves from the need to maximize returns to shareholders. When this single-minded focus is removed, a broader mission is possible.

In her book Doughnut Economics, best-selling author Kate Raworth describes the need to “design to distribute” in ensuring that the business world and our economies create a society and planet that thrives. Since design thinking is now in vogue, I wonder if we can allow ourselves to apply it to business. But if we are to design businesses differently, we must look beyond the design of products, or even their models of generating income. It is about revisiting the design of the very core of business – its purpose. This means giving ourselves the liberty to rewire business in order to pursue what society needs from it. Fair trade enterprises show that this is possible, and movement’s audacious experiment may be ready to inspire something bigger.